Advance registration is required for Zoom Webinar. You can watch the talk live on our Facebook page without any registration. 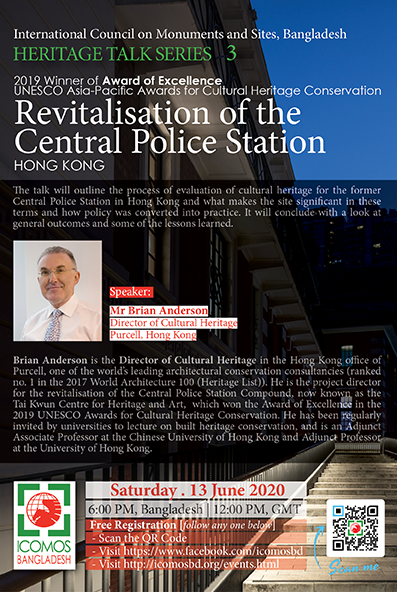 After registering, you will receive a confirmation email containing information about joining the event. 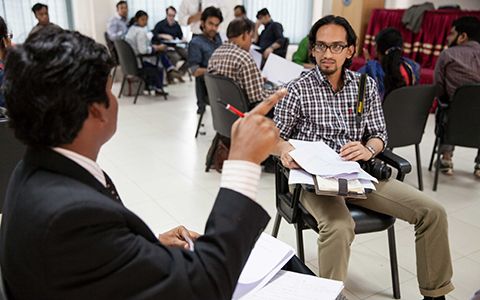 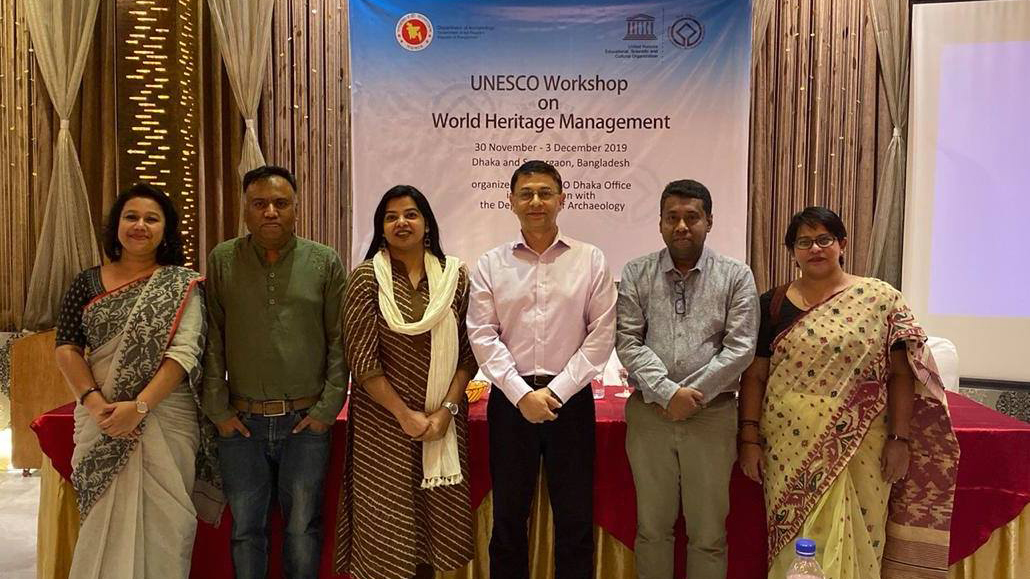 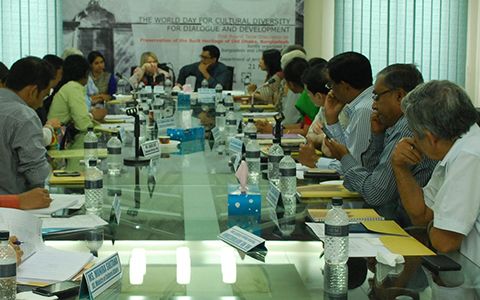 Be the first to get our event news

We update our Facbook page frequently and our event news are posted there first. To receive ICOMOS Bangladesh event news and our partners' event news regularly, "Like" our Facebook page. 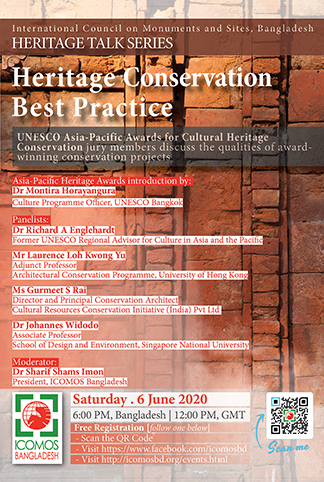 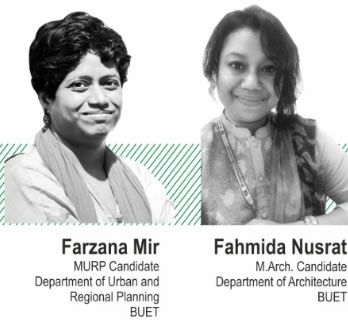 For a city that started on the bank of a river, Dhaka shows a unique characteristic in its urban development pattern. The 400-year old city in its historical timeline shifted from the river towards the land, giving preference to a certain area that is known as Ramna. The history of Ramna began in 1608 with the Mughal. It comprised two residential areas of the high officials of the Mughals. It once placed Mughal garden, green open spaces, and garden houses. The British cleared the jungle of Ramna and built a racecourse and boulevard for the elites to stroll in the evening. The planning of this area as the civil station of the newly formed province of East Bengal and Assam in 1905 saw the construction of several edifices. It also witnessed the building of the first modern architecture by Architect Mazharul Islam of Bangladesh. A walk started from the Musa Khan Mosque tucked in between Curzon Hall and Shahidullah Hall towards the Institute of Fine Arts of Dhaka University would take us from Mughal to Modern Dhaka. The collections of buildings of Ramna from different historical phases tell the story of the past in a synchronized manner. The study reveals a diverse historic route of a different timeline within the contemporary urban form of Dhaka. Hence objective of this paper is to explore how the embedded connectivity of a historic urban segment can be traced down with the help of space syntax analysis to define a unique heritage route for future planning of the city.

Locating the Lost Waterbodies in Dhaka 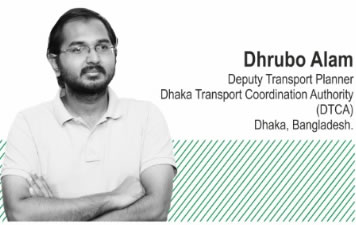 Dhaka, a present-day megacity and the capital of Bangladesh, started as a settlement on the bank of Buriganga river (probably from the river port presently known as Sadarghat, and nearby Banglabazar) and expanded along the natural levee created by the river. It sits almost on the confluence of the tributaries of two large river basins, namely Meghna and Brahmaputra. It (greater Dhaka) had and still has (Buriganga, Shitalakkhya, Turag and Balu) rivers though in a miserable condition around its periphery. Also, the city used to have two large canals, which sometimes have been termed as rivers (i.e. Dolai and Pandu river/canal). Moreover, the city also had swamps or marshes covering a substantial area. As a result, the Mughal rulers in between 17th and 18th century built flood protection structure (bund) to save the city from frequent flooding and also dug up and extended Dolai Canal. They also constructed metalled roads for better movement, which reduced the significance of waterways as a mode of travel. In the British period, the city corporation, which was established in 1864, started to build and maintain roads extensively, managed drainage and sewerage systems. All these resulted in less and less importance of the presence of the waterbodies in Dhaka. Also, with the rapid increase in population and urbanization, the demand for land started to rise, and the prices went up. So, not only the private owners but also the governmental organizations of the swamp or marshlands filled up their waterbodies for different purposes. Some of the water bodies became dump yards, and canals became drains to carry sewer (and rainwater), a trend which was initiated by the British and continues today. This presentation tries to locate three of those lost water bodies (e.g. Pandu River, Dolai Canal and Miran Jalla) of Dhaka, explore the reasons they have been lost and their present situation. 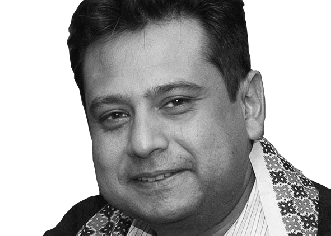 International Centre for the Study of the Preservation and Restoration of Cultural Property (ICCROM), Rome, Italy

Statistics point to the fact that in recent decades, most disaster events were hydrological, meteorological or climatological in nature and have adversely affected cultural heritage of cities. Recent projections from the UN point that global warming could rise up to 3.2 degrees Celsius by 2100, which is higher than the limit of 2 degrees Celsius set by the Paris Agreement. Historic Cities globally and especially in South Asia are witnessing increasing pressure of urbanization that exacerbates their vulnerability to climate risks as demonstrated by increased instances of urban flooding, heat islands and epidemics. Since people, properties, infrastructure, and capital stock are concentrated in cities, the impact of climate change-related hazards in urban areas can be catastrophic and economic costs of their recovery can run into billions of dollars. The lecture will highlight the impact of climate change on urban heritage with a special focus on South Asia. It will also illustrate how urban heritage can contribute towards building resilience through traditional knowledge systems accumulated over generations of human experience in dealing with changing environmental conditions. Various polices, strategies and planning measures necessary for mitigating and adapting to the risks of climate change will be explained through examples along with transformative change needed for creating enabling conditions for implementation. The presentation will conclude by highlighting various international initiatives undertaken by organizations such as ICCROM and ICOMOS to build climate resilience of historic cities and urban areas. 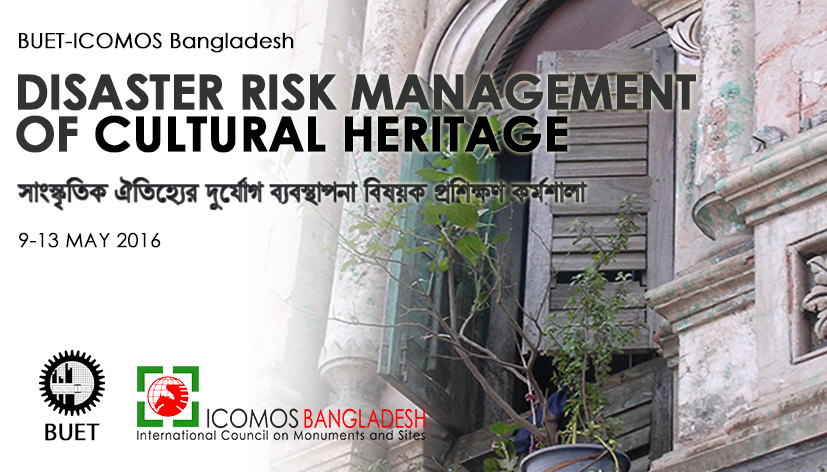 Our upcoming training workshop on Disaster Risk Management of Cultural Heritage will take place from 9 to 13 May at the Bangladesh University of Engineering and Technology (BUET). It is a joint BUET-ICOMOS initiative in which ICOMOS Bangladesh is proud to have the Department of Architecture (BUET) as the partner. An international ICOMOS expert in this field, along with local experts, will lead the 4.5-day training workshop. To know more about ICOMOS' activities related to this important area of heritage management, please read on. Workshop page »

The World Day for Cultural Diversity for Dialogue and Development- 2015

First Round Table Discussion on the Preservation of the Built Heritage of Old Dhaka, Bangladesh

Since 2001, UNESCO has been celebrating 21 May as The World Day for Cultural Diversity for Dialogue and Development. The day aims to highlight the UNESCO’s Convention on the Protection and Promotion of the Diversity of Cultural Expressions 2005 that provides a framework to form new pathways to encourage cultural diversity, creativity and innovation in the pursuit of inclusive, equitable and sustainable growth and development. The World Day for Cultural Diversity for Dialogue and Development gives us the opportunity to deepen our understanding of the values of cultural diversity ranging from cultural heritage to creative industries, sustainable tourism to cultural infrastructure as driver and enabler of sustainable development. This year, on 21 May, ICOMOS Bangladesh and UNESCO Dhaka jointly organized the First Round Table Discussion on the Preservation of the Built Heritage of Old Dhaka, Bangladesh to share ideas and exchange views among scholars, academia, researchers and professionals working in relevant fields.

The discussion, which was inaugurated by Ms. Beatrice Kaldun, Head and Representative of UNESCO Dhaka and moderated by Mr. Sazzad Hossain, General Secretary of ICOMOS Bangladesh, brought together a group of stakeholders to engage in joint actions and to make clear suggestions on how to best manage the dynamic forces that is causing rapid urban transformation, and maintain the essential physical fabric of historic areas of Dhaka while ensuring their social and economic viability as well as long term sustainability. Within the broader urban management framework, the discussion focused on the following key issues:

The discussions identified several key obstacles to achieving these goals and lead to the conclusion that an integrated approach is necessary for a meaningful preservation and revitalization of the historic areas and concluded with the following recommendations:

The First ICOMOS-Bangladesh Workshop on Heritage Conservation and Management In partnership with Department of Architecture, Southeast University, Dhaka Supported by UNESCO Dhaka.

There is a growing interest – along with an increase – in the number of projects involving cultural heritage in Bangladesh. However, a lack of opportunities for professional development for people involved in heritage protection or interested in developing a career in this field means Bangladesh is lagging far behind in protecting its cultural heritage, even when compared to other countries in the South Asian region. The aim of this workshop, which is the first of a series of workshops to be organised by ICOMOS-Bangladesh in future, is to provide a framework for professional assessment of heritage significance of cultural sites. The assessment is an essential first step for a wide array of decision making process touching sites of (potential) heritage importance. Providing a statement of heritage significance is also a required component of any nomination for UNESCO World Heritage inscription.

This workshop aimed to provide its participants with a framework to carry out a professional assessment of heritage significance of cultural sites and to develop a Statement of Heritage Significance, a key component of a Conservation Plan and Management Plan for heritage sites.

ICOMOS Bangladesh is the Bangladesh National Committee of the International Council on Monuments and Sites (ICOMOS), established in 1965.

This year, ICOMOS celebrates its 50th anniversary by honouring its founders and highlighting its achievements so far, but above all by reflecting on its future objectives through a series of international events and on the basis of a modernized set of Statutes and Ethical Principles.

If you are interested in joining the global network of cultural heritage professionals and get involved in ICOMOS' activities, please visit our page on membership for detailed information on how to become an ICOMOS Bangladesh member.